high way for one 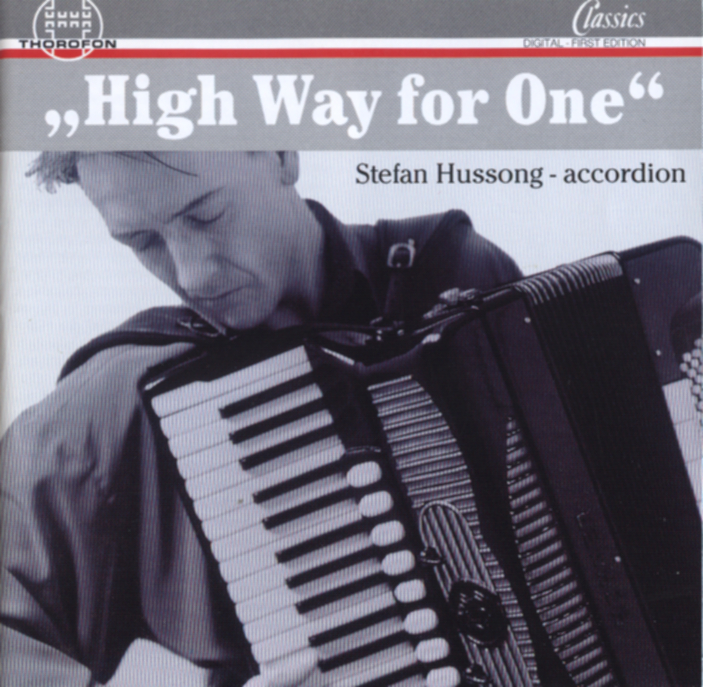 We should be very thankful to performers like Friedrich Lips, Geir Draugsvoll and Stefan Hussong for continuing to record unorthodox music on disc after disc. How else could we possibly hear this material? In the United States, accordion clubs and festivals are overwhelmingly conservative. It would be a rare occasion indeed to hear anything like the pieces contained in this album. For this reason, every recording by these gifted performers is to be treasured and the players honored for their devotion to difficult works that have no guaranteed audience acceptance. This CD High Way for One, is one of Hussong's most radical collections. There's not one conventionally tonal piece in the lot. As usual with this accordionist, there is a highly methodical and painstaking approach to the material. It's a challenging recording that demands complete attention. The wonderful title of the first track High Way for One is a distillation of a larger piece of accordion and 19 instruments called High Way by Adriana Holszky. There is certainly much nervous energy here though it doesn't really call up traffic patterns as described in the booklet - at least not to this listener's mind. Beginning with harsh repeated chords in irregular rhythms shooting between left and right hands, scampering runs lead to trills and pulsing intervals. It ends on a very high tone that fades to button sounds. A significant addition to this recording is Luciano Berio's Sequenza XIII. Berio wrote many solo pieces called Sequenza for different instruments. His lovely work for the accordion brings in a nice lyrical theme that recurs throughout, emphasizing an organ texture. Many phrases end on a quivering tremolo - a very haunting effect. From the deepest range begins Arne Nordheim's Dinosauros for accordion and tape. It was written in 1971, making it the earliest piece on the album. The additional manipulated accordion and electronic sounds give the piece an otherworldly quality. After an atmospheric first few minutes, a thematic rhythmic pattern repeats with canonic accompaniment from the tape that appears to be playing the notes backwards. A slapped cluster section follows, blasting up into the very high piccolo reeds which, with the tape sounds, suggest satellite radio signals. A low pitch-bend section definitely brings to mind huge lumbering creatures in a primitive landscape. Bellows beating and register switch clicks fade into the distance, suggesting that a primal parade has receded into the past. Quite an effective piece, though I would have liked the canonic theme heard earlier to reprise somewhere before the end. A delicate rain of notes patters down at the beginning of Hyunkyun Lim's Me-A-Ri. What stays in the mind though is the simple pulse rhythm that follows which returns with a vengeance midway through. The title is explained as meaning "echo." The lengthy last part becomes reflective and subdued. Tones slowly stack up and are pulled out to form continuous harmonic waves of stratified densities that are gradually peeled away. Probably my favorite accordion solo piece is Sofia Gubaidulina's De Profundis, which has become a classic of the modern repertoire. It has been repeatedly recorded by many of the world's greatest accordionists. What elevates this piece above exploration of novel sounds is its emotional symbolic power. From the depths of suffering to the transcendent passage that concludes the piece, there is an emotional 'through line' that connects the contrasting sections. Hussong does an admirable job with it, and it's the first time I've heard it played on a piano accordion. Russian "bayans" such as what Friedrich Lips plays, have a purer tone possibly due to Russian reeds that are mounted together on single plates and made of harder steel. Still Hussong's Hohner is certainly up to the task here and he demonstrates an understanding and sensitivity to the material. There is much rubato used and some improvisational liberties but that is the case with other players I've heard. Tokyo composer Keiko Harada concludes the album with BONE+ a sometimes engaging, sometimes rambling work that starts furiously then thins out over the center section only to pick up speed and intensity near the end. Though I liked many of the subtle touches, I found this one hard to connect with (particularly in the very extended center section) though there is much impressive playing here.The recording quality on this CD is beautiful with tastefully applied reverb and just the right amount of distinction between bass and treble manuals. The booklet is informative with interesting quotes from composers and critics. This album is recommended for those who love the avant-garde and/or new unconventional music for the accordion.