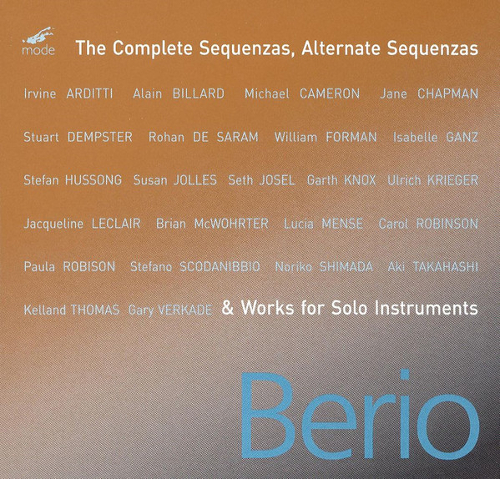 disc #3 from: The Complete Sequenzas and works for solo instruments – luciano berio (4 discs)

Luciano Berio greatly enriched the repertoire for solo instruments and voice with his series of sixteen Sequenzas and works such as Psy, Gesti, Rounds and Fa-Si. Written between 1958 and 2002 and spanning almost five decades of Berio's creative career, these solo compositions reflect some of his most crucial aesthetic ideas and compositional techniques. The first COMPLETE recording of the Sequenazs: This set includes the world premiere recording of Sequenza XIV for solo cello, written for ex-Arditti Quartet cellist Rohan de Saram, who performs the Sequenza here. The first COMPLETE recording of the alternate Sequenazs: At the request of many soloists, Berio arranged several of the Sequenzas for alternate instrumentation. This set compiles all of Berio's alternate Sequenzas for the first time, also with some first recordings. Plus all of Berio's works for solo instruments: Also collected together for the first time, Berio's solo works and personal arrangements (with the exception of those for solo piano, which would be a full CD in itself) are included. Berio was good friends with the Italian author Edoardo Sanguineti, who began writing the verses for individual Sequenzas in 1994. In performance, each verse can be recited before its respective Sequenza. All of the Sanguineti verses are presented here before each Sequenza, as performed by the distinguished Italian actor Enzo Salomone. An international all-star cast of performers: Mode had the good fortune to begin this set with the help of Mr. Berio, who suggested some of the performers here. They include members of The Arditti Quartet and Ensemble Modern along with other distinguished soloists.

Mode's set of Luciano Berio's "Complete Sequenzas, Alternate Sequenzas and Solo Works" has been awarded the Best Contemporary Music Release 2008 (Premio del Disco Amadeus 2008) from Italy's prestigious Amadeus Music magazine. This is the fourth major accolade for this release, including the 2007 Deutsche Schallplattenkritik Jahrespreis, a "Diapason 5" from France's Diapason magazine and one of the year's 10 Best Releases from the New York Times.

...you can't do better than a four-CD set released last year on Mode Records. The performances are extraordinary across the board. The performers include some stars of contemporary music, such as violinist Irvine Arditti and violist Garth Knox, and two of the players -- trombonist Stuart Dempster and cellist Rohan de Saram -- are the original dedicatees of their respective works. Mode has also included alternate arrangements and a host of Berio's other solo pieces, as well as excellent, detailed notes.