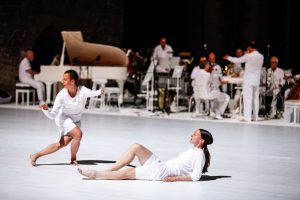 An unprecedented dialogue between dazzling dancers and one of the greatest modern music ensembles.

Just like water in the Sufi poem—which gives its name to the show—carries messages from the fire, the body is the vehicle between Emanuel Gat and dance. Story Water brings together on the stage of the Cour d’honneur of the Palais des papes dancers and musicians caught in the same intense white light, which sublimes, through movement, a story told in real time, never exactly the same from one night to the next. All are carried away into the same present by the music, be it mathematical and meditative like Pierre Boulez’ or wild and physical like Rebecca Saunders’s. A music composed by the choreographer and the musicians according to the logic of a dance in which the ensemble becomes attuned in time with every individual performer. Together, they build before our eyes a choral piece, incredibly free, in which dance, music, and painting enter a dialogue via the bodies. A reminder that Emanuel Gat has spent the past 25 years exploring the infinite potential of human relationships.